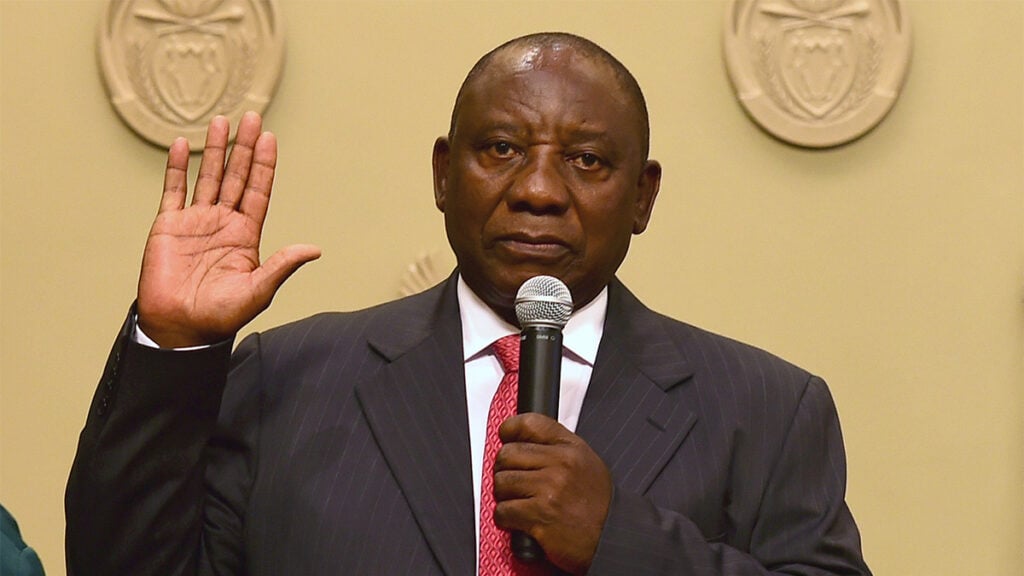 Speaking at a media conference following his UK visit, Ramaphosa said when Eskom management wanted to build new power stations years ago, they were stopped.

“They were told, no, don’t, the power stations will be built by the private sector. You just keep the lights on,” Ramaphosa told journalists.

He added that maintenance was stopped for 12 years and that power stations “were driven hard” on the instruction to keep the lights on.

However, his latest claim is in stark contrast to his promise on 2 September 2015 that load-shedding would be a thing of the past in 18 months to 2 years.

“In eighteen months to two years, you will forget that the challenges we had in relation to power or energy or Eskom ever existed,” he said seven years ago.

Ramaphosa was confident that load-shedding would be a thing of the past because two new power stations – Medupi and Kusile – were set to come online.

These two mega power stations would add 9,600MW of reliable generation capacity to the grid, enough to resolve the energy shortages.

It did not happen. Corruption, mismanagement, design problems, and human error have crushed Medupi and Kusile’s performance.

A large part of the mismanagement, corruption and other problems occurred under Ramaphosa’s watch. In December 2014, he was appointed head of the Eskom war room to fix load-shedding.

He failed to tell reporters that most of Eskom’s problems, including load-shedding, are a result of the government’s policies and interference in the energy sector.

Instead of taking responsibility for Eskom’s poor performance, Ramaphosa, and Eskom, have created a narrative that the past is to blame for current load-shedding issues.

Here is a look at Ramaphosa’s claims about problems in South Africa’s energy sector – and what the facts say.

President Cyril Ramaphosa claimed that maintenance was stopped for 12 years and that power stations were driven hard to keep the lights on.

Planned maintenance increased significantly over the last decade, and maintenance and repair costs more than doubled.

Ramaphosa claim – Eskom wanted to build new power stations, but they were stopped because the private sector was supposed to do it.

Ramaphosa claimed that there was a time when “Eskom management wanted to build new power stations, and they were told no, don’t, the power stations will be built by the private sector”.

The reality is that the government prevented the private sector from building power stations and adding electricity to the grid. In fact, it is still the case.

In a 1998 White Paper, the Department of Minerals and Energy and Eskom warned that South Africa’s generation capacity surplus would be fully utilised by about 2007.

Former President Thabo Mbeki admitted that the government blocked Eskom’s request to build additional capacity, which was a mistake.

Over the last decade, many stakeholders have called on the government to lift restrictions on power generation preventing the private sector from helping to ease the country’s electricity shortages.

However, the government maintained its licence-exemption threshold of 1MW on private power plants.

It was only when the situation became untenable, with load-shedding crushing the economy, that the regulations were changed to allow up to 100MW of generating capacity without a license.

Ramaphosa said Eskom’s problems started in 2007 or even earlier. He added that when new power stations began to be built, the skilled employees had already left the company.

The president blamed the “outsiders and original equipment manufacturers” who were not part of Eskom for the design problems at Medupi and Kusile.

Eskom had ample time to address the problems between 2007 and now. In fact, Ramaphosa oversaw the process of fixing the power utility.

However, instead of appointing an experienced Eskom executive to lead the company, he opted for Brian Molefe, who had no experience and is now implicated in state capture.

Another problem is a lack of skills and poor performance of staff which are behind many of Eskom’s problems.

The loss of skills is mainly a result of the government’s affirmative action and black economic empowerment (BEE) policies.

In 2015, under Ramaphosa’s watch, reports surfaced that Eskom was set to axe up to 3,389 skilled white employees, including 1,081 white engineers and managers, as it ramped up its affirmative action policy.

Solidarity chief executive Dirk Hermann highlighted that whites who had to be shed, around 3,200 were in posts that were on critical technical and managerial levels.

Eskom was warned that it would have catastrophic consequences down the road, but Eskom and the government insisted on meeting affirmative action targets.

When Solidarity offered to help bring back skilled technical people previously employed by Eskom in 2019, they were ignored.

The lack of skills at Eskom has caused numerous problems, including breakdowns, poor maintenance, and catastrophic events like the explosion at Medupi.

Instead of admitting that empowerment rules are damaging Eskom, the government is doubling down on its BEE and affirmative action policies.